Modules include a form factor suitable for wearable applications, a development platform, and a module with an onboard accelerometer, opening the door to more application opportunities.

ANT Operation (when loaded with S212 or S332 SoftDevice)

Bluetooth Operation (when loaded with the S132 or S332 SoftDevice) 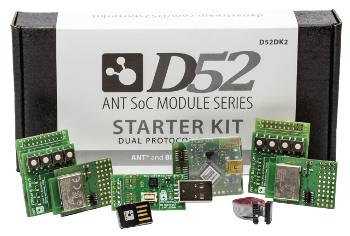 Development with the D52 ANT SoC Module Series is supported by a starter kit (D52DK2) and an extender kit (D52EXT1), which is designed to work with the starter kit.  Most components in both kits are also available for sale individually from distributors.

The D52 starter kit (D52DK2) contains all the hardware necessary to get developing with ANT or Bluetooth® low energy technology, and the downloadable ANT SoC Module Starter Kit User Manual has full details on using the kit with reference examples and the nRF5 SDK from Nordic Semiconductor.

The kit contents are described below: 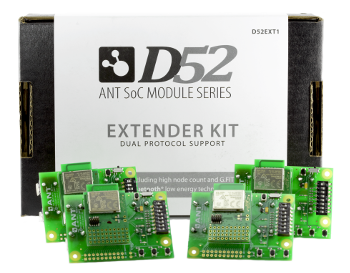 The D52 extender kit (D52EXT1) builds on the D52 starter kit to provide extra nodes and more power for IoT developers and platforms, including ANT BLAZE™.  The introduction of this kit also coincides with the availability of the ANTBAT3 combination I/O and battery board.  Powered by 2 AA batteries, the development board enables longer testing and development and includes buttons and LEDs for testing input and interaction.  A D52 starter kit is recommended for use with the extender kit, as the starter kit includes the tools necessary to program and monitor development nodes.

The contents of the extender kit are described, below:

Please refer to ANT Wireless or Nordic Semiconductor for licensing information about SoftDevices and associated software.

The D52 Series of modules (including G.FIT) have been designed to support the ANT and/or Bluetooth low energy Protocols and are certified for use in many geographic regions around the globe. However, a product incorporating the D52 series module may carry the certification IDs of the module only if it complies with the restrictions and terms, including use of Garmin-approved software, provided in the conditions of use available at:

Discuss this product at the ANT Hardware Products Forum.

Modules from the D52 ANT SoC Module Series must use one of the approved ANT and/or Bluetooth low energy SoftDevice versions described on this page for all radio operation.  Signing and registering a D52 Series Module Distribution Agreement with Garmin Canada Inc. (via thisisant.com) is an acknowledgement of these conditions of use, and also carries benefits as described on this page.  The table, below, will be updated when new versions are released and approved for use on D52 Series modules.

Signing a D52 Series Module Distribution Agreement and registering it with Garmin Canada Inc. (via Thisisant.com) carries the following benefits: